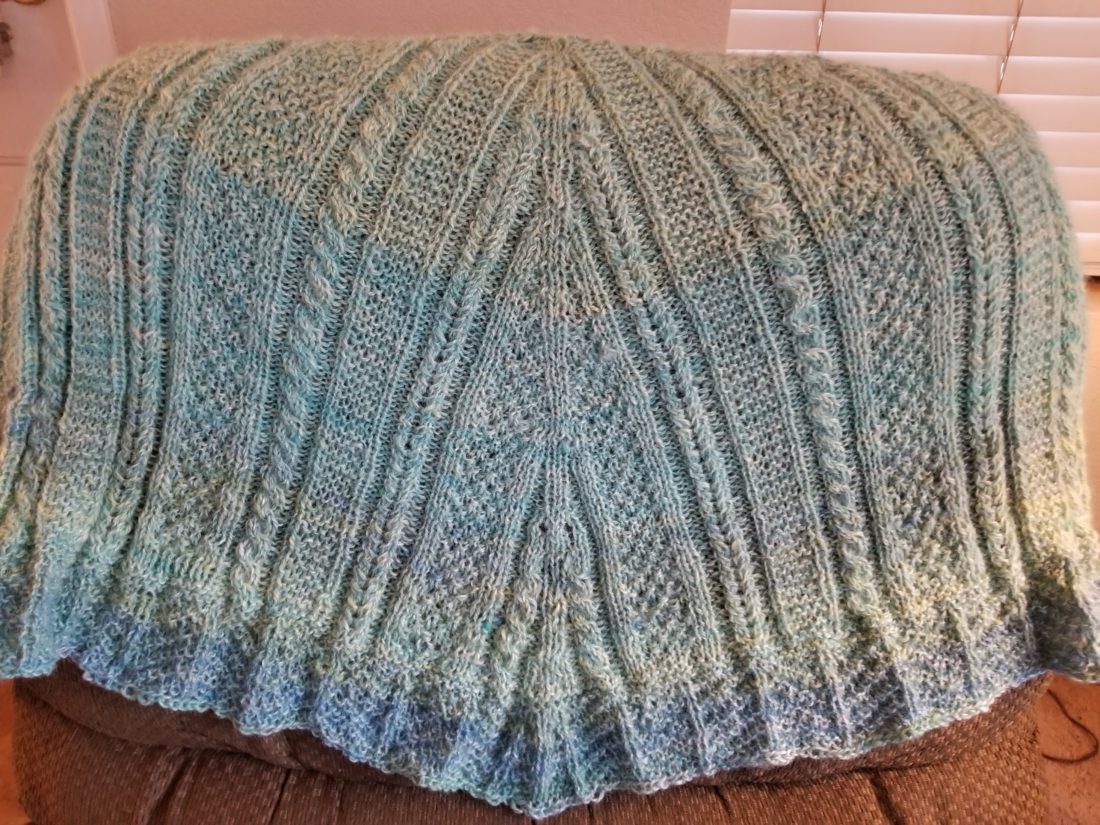 Knitting the Metaphor of Life

Owning alpacas means I have a lot of fiber (I have 23 alpacas!) to produce into something of use. I learned to knit as a kid. My mom was an avid knitter. But, I didn’t really knit for about 30 years and decided to pick it up the last couple of years. My friends were knitting these amazing shawls so finally dipped my toe into that world of knitting and I have been having a blast learning and growing my skills.

Knitting these shawls have been really quite the metaphor for my life. The yarn isn’t usually something I go buy but is home grown. I spend all year raking poop and feeding the animals that are shorn once a year to harvest the fleece. This yarn for the shawl pictured, went from my animal to a friend who hand dyed it, then off to a mill to be made into roving, back to me and I handspun the yarn before I could begin knitting! Once the yarn is made, and I find a pattern I like (and one I think I can figure out how to do!), I begin knitting. It takes some time to study the pattern and go look up some Youtubes because I don’t recall how or never have done some of the stitches needed. Then I begin knitting. Most of the time, I have to start over a few times because I make a mistake and it is easier to just start over at that stage. So I start again and again and again. But eventually, I get going. With a shawl like the one in this picture, I start with only three stitches! It grows every row. I have no idea how the yarn will flow and what the colors will do with the pattern. (A metaphor of life right there! How often do we start with a plan but we really aren’t sure how that plan will really come out? And how often do we have to start over?)

Once the knitting goes in earnest, I usually makes some mistakes and then have to go backwards a number of times to go and fix the mistakes. I use to have to turn to a friend every time I made a mistake to get help. But, the last two shawls, I’ve been able to fix my own mistakes with no assistance! (Another metaphor there of life now isn’t it!). Sometimes we need to take a step back to go back and take a look at where we went wrong so we can get ourselves going in the right direction again. Sometimes we need help to get ourselves unraveled until we have the tools and skills to help ourselves). If I left a mistake of a dropped stitch, it would unravel the shawl. That mistake can’t get left in. It has to get fixed! But there are others that I probably did a purl instead of a knit or vice a versa and left those mistakes in. I will share a secret with you. On the one side of the shawl, that row of cables is not going the direction the pattern called for. I was suppose to reverse the cable but I didn’t catch that I was doing that wrong according to the pattern until I was well into the shawl so I decided that was my design modification! I didn’t need to go back and fix that mistake. I made it part of the design path instead! We can do that in life too. (Another Metaphor of life! Turn a mistake into something that works.) If I didn’t share my secret, no one would probably know that that cable should be going the other way if I followed the pattern accurately! And I rather like my cable modification!