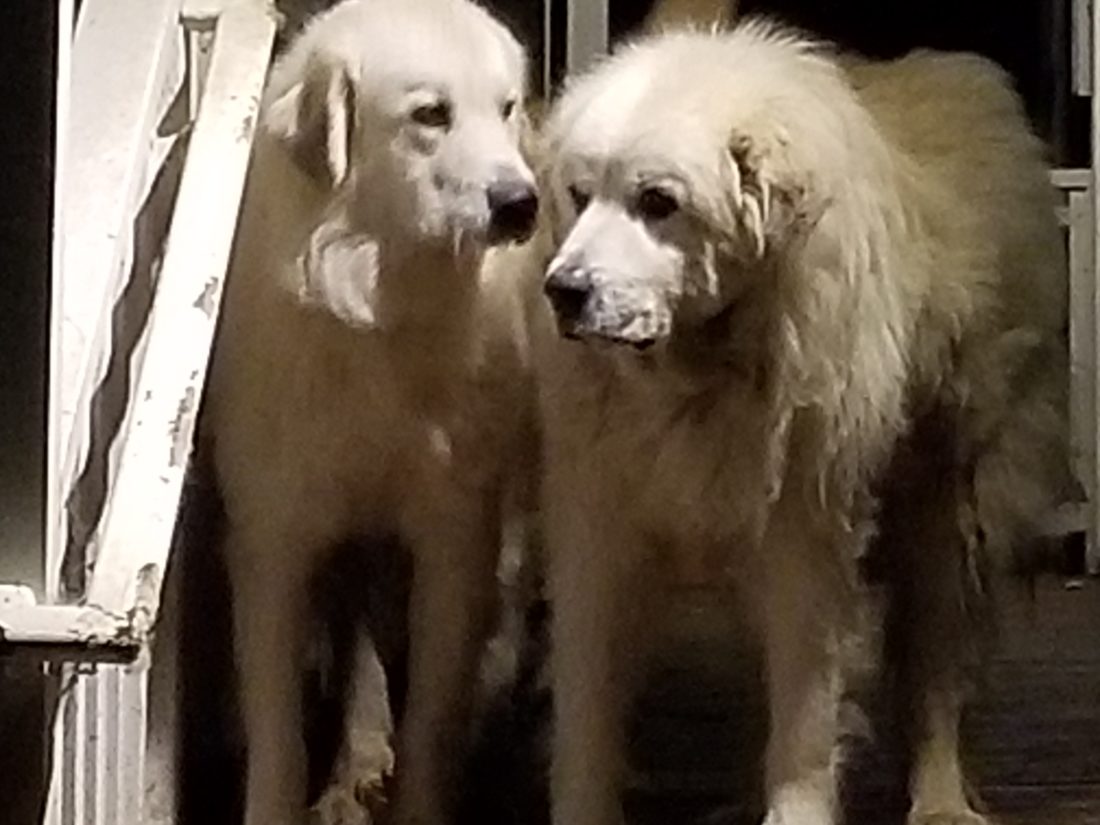 Communicating to a Butthead Adolescent Dog

This picture is of my two Livestock Guardian Dogs (LGDs). Moose is on the right and Yogi on the left. Moose is ten years old and Yogi just turned one. Moose trained Yogi the role of protecting my herd of alpacas (and they also include the barn cats!). Moose, being ten, is semi-retired. His legs are getting wobbly. He has the heart of a guardian but there are days and some nights that he rather just be a house dog. He has earned those privileges.

With the weather cooling down at nights with some rain, Moose has been sleeping in more often. Yogi is doing a great job protecting his herd, but he is also missing Moose. This has resulted in him being super excited when we go into the pastures first thing in the morning to do chores. He is so happy to see Moose especially. That puppy energy and being an adolescent created a behavioral issue. Yogi was jumping on Moose and hurting him. Moose was reprimanding Yogi and snapping at him to stop, but being an adolescent, he was not interested in listening to either Moose or me. If I came over, Yogi stopped the behavior immediately, but the second I went back to chores, Yogi was back jumping on Moose trying to get him to play. It was becoming a real problem and both Moose and I were getting very irritated and downright mad at the rude boy!

I knew Yogi was understanding that Moose was telling him to stop and the fact that he stopped when I came over, told me he understood it as well. He was just not wanting to listen and do as was told. (How many adolescents do you know that fit that behavior???). I was at my wits end. I tried communicating to him intuitively, pulling him off and giving him timeouts by separating him from Moose. None of it was working and the behavior was getting worse. I finally decided that if I couldn’t get Yogi to stop being a butthead, I was just going to have to keep the boys separated. It broke my heart to do that to them because they do love each other, yet, I couldn’t allow Yogi to hurt Moose and he could very easily do that. He certainly wasn’t meaning to hurt Moose. That part, I know was not his intention. He simply wanted to play with his big brother.

The other night was horrible with Yogi not listening and I removed him from Moose until supper time when I can monitor them. (Like I said, when I’m right there, he knows not to jump on Moose). We walked in to have supper. I feed Moose and Tesla in the house and Yogi eats on my deck. I put his food down and decided to try another heart to heart intuitive conversation with Yogi and his behavior.
I placed my third eye (forehead) on his third eye. And I talked from my heart. I wasn’t in anger or frustration mode, but truly from my heart. I communicated to him that I really needed him to listen. I then went on to tell him that he was hurting Moose when he jumped on him and that it was unacceptable of him not to listen to Moose when he said to stop. I told him I knew he didn’t mean to hurt him and that he has the biggest sweetest heart, but he was hurting Moose and I was not going to allow that any longer. He had one choice to make. Either stop jumping on Moose or he’d not get to hang out with his brother any more. I need him to keep his feet on the ground, give Moose “Space,” and to listen to us. If he did that, he could get to hang out with his best buddy.

That night Moose slept in the house. The next morning we went out to do chores. I hesitated about letting Moose join Yogi but he really wanted to so I did so. They do a patrol of the perimeter of the fence first thing as I open the gates to let the alpacas out. I went about my chores. On their way back, Yogi started to be a butthead and Moose reprimanded him but he didn’t listen. I dropped my rake to head into the big pasture they were in and separate them. I hollered at Yogi to stop and to give Moose “Space.” Amazingly, he LISTENED!!!! He stopped jumping on Moose. It was like, “Oh yeah! I forgot.” Yogi became a perfect gentleman. They walked in as nice as could be and I kept praising the heck out of Yogi for being a good boy. I was so happy to see him behaving himself and listening. He only jumped on Moose one more time later on and Moose reprimanded him and that was it. He stopped. I didn’t even need to back up Moose. He remembered he was to stop and he did so. I again praised the heck out of him.

Today, there was no need for one reprimand from either Moose or me. They patrolled, they hung out together. Moose even wanted to sleep out with Yogi last night. I think some of the time he chose to sleep in was to get away from the bratty brother, but now that he was behaving, he preferred to be out with his little brother and his alpacas again. Not only is it a huge relief that Yogi is behaving, but it made me so grateful to be able to communicate to animals. I learned a lot about my own communication with my animals. It is way harder with your own pets then someone else’s! But communicating from the place of anger is not as effective as coming from the place of the heart (not easy when they are being such buttheads!). And telling them what you do want in clear specific phrasing (“feet on the ground, space.). And then give them a ton of praise and rewards when they do what they are asked. It feels so much better for us all to offer praises when they do good then get mad!!! Hopefully and fingers crossed, we have gotten through this behavior hiccup!